Senior goaltender Sidney Peters (Geneva, Ill.) of the University of Minnesota Women’s Hockey team was named the 2018 Hockey Humanitarian Award recipient, which was announced on Friday afternoon at Roy Wilkins Auditorium as part of the Men’s Frozen Four weekend. Peters is the 23rd honoree in the award’s history, which dates back to 1996. 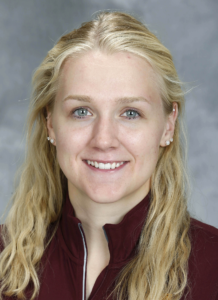 Peters’ contributions on the ice and in the classroom are only topped by her impact in the community over the past five years. She brings a grounded perspective to the Gophers’ locker room and is the first to say that, while she loves the sport, there is more to life than hockey. Her teammates describe her as compassionate, dedicated, and thoughtful.

“As we’ve gotten to know Sidney through the nomination process, we have been increasingly impressed with her core values of volunteerism and her passion to make a difference,” said Matt Patrick, Executive Director of the Hockey Humanitarian Award Foundation.

Peters has logged over 830 volunteer hours with various community outreach volunteer activities as a Gopher. A certified Emergency Medical Technician, Peters has spent significant time volunteering with the University of Minnesota EMS and the Rush-Copley Emergency Department in Aurora, Ill., near her hometown of Geneva, Ill.

“Receiving the Hockey Humanitarian Award is a huge honor,” Peters said. “It places me in a category with past nominees and award winners who are just phenomenal people who have made a huge difference in their communities; most importantly, inspiring people around them to think and serve differently. I’m really proud to be associated with this award and really thankful to be associated with the other finalists.”

“I got into volunteering as a freshman with the University of Minnesota Maroon & Gold Impacting the Community (M.A.G.I.C.), which is a student-athlete development program. They give us many opportunities to get out in the community, to volunteer with local schools and hospitals. That was my first step into volunteering, and it gave me the opportunity to meet people and build a community. That’s when I fell in love with service and began pursuing other opportunities, mostly as an EMT because medicine is my passion.”

Ever service-minded, Peters traveled to Haiti during the summer of 2016 with Project Medishare, which is dedicated to improving the health and quality of life of all Haitians by empowering them to provide and receive access to comprehensive, quality health care. She spent eight days in Haiti volunteering at Hospital Bernard Mevs, the country’s only critical care and trauma hospital, as well as the only newborn and pediatric intensive care unit.

Combining her love of hockey with her faith, Peters volunteered as the head goalie coach for Hockey Ministries International at the organization’s camp in Chicago for two years as well. Her volunteer experience during her Gopher career includes significant time giving back locally with HopeKids, Special Olympics Minnesota, and University of Minnesota Masonic Children’s Hospital, along with efforts at local elementary and middle schools and youth hockey associations.

“We’re so happy for Sidney – what an incredible honor,” Gopher Women’s Hockey Head Coach Brad Frost said. “Sidney’s story is one of perseverance and fighting through adversity and still being able to think of others in the midst of that, and I think that speaks volumes to who she is as a person. She loves to do things for others. She has a heart for people and desires to be the light of the world wherever she goes.”

A fifth-year senior, Peters is a four-year letter winner for the University of Minnesota. A two-time NCAA national champion team member, Peters appeared in 82 games with a career record of 53-17-6. After seeing limited playing time her first two seasons in uniform, Peters backstopped the Gophers to an NCAA Frozen Four berth last season. Her 53 wins, 16 shutouts, 1.65 goals against average, and 1,464 total saves all rank fifth among all-time Gopher goaltenders. Peters ranks sixth in program history with a .921 career save percentage.

A four-time WCHA Scholar-Athlete, WCHA All-Academic, and Academic All-Big Ten honoree, Peters will graduate with a degree in Kinesiology with a minor in biology with plans to attend medical school.

The award was presented as part of a broader celebration of the Frozen Four and college hockey, which included the presentation of the Hobey Baker Memorial Award. The Hockey Humanitarian Award Foundation also presented Peters with a check for $2,500 during the ceremony, which will be donated to her designated charity, Project Medishare. All five HHA finalists received $500 for their respective designated charities. These donations from the HHA Foundation are possible through the generous support of the award’s partners and donors.