In addition to being a forward on the ice for the Polar Bears over the last four years, Camil Blanchet has been an exemplary member of the Bowdoin community. The McKeen Common Good Center representative to the Bowdoin Student Government, he is responsible for all communications with the student body. He has taken the initiative on numerous service efforts including the hockey team’s recent Cerebral Palsy Fundraiser Game, a fundraiser in conjunction with the football team for the American Cancer Society, and arranging 24 volunteers to assist with the “Race the Runway” half-marathon, a local road race that benefits numerous organizations, including Veterans No Boundaries and Coastal Humane Society. Blanchet has also been a point-person for the “Breaking the Bubble” initiative on campus, where he recruited 25 student-athletes to participate in community service leadership training. A graduate of Deerfield Academy, Blanchet is an Academic All-NESCAC honoree majoring in Neuroscience. Pensavalle exemplifies what it means to be a student-athlete, active as a Division I varsity athlete and involved in a variety of ways around campus. The Yale senior hockey forward is a member of the acapella singing group composed of Yale student-athletes, the Unorthojocks. Pensavalle also currently serves as the lead drive coordinator for the Mandi Schwartz Marrow Registration Drive, partnered with Be the Match. She manages and executes the yearly spring drive in honor of former Yale teammate Mandi Schwartz. She is dedicated to helping grow support for the annual White Out For Mandi game, as well as Be the Match and the Mandi Schwartz Foundation. The drive has led to over 30 lives saved and over 6,400 unique people being added to the bone marrow registry. The sociology major has also excelled in the classroom with a 3.9 GPA and multiple ECAC Hockey All-Academic selections. Sidney Peters’ contributions on the ice, in the classroom, and in the community at the University of Minnesota over the past five seasons are immeasurable. A left-handed goaltender majoring in kinesiology, Peters also is a certified Emergency Medical Technician. She has logged over 785 volunteer hours with various community outreach activities during her Gophers career, including a self-described life-changing trip to Haiti with Project Medishare where she spent eight days volunteering at Haiti’s only critical care and trauma hospital. Her volunteer efforts also include serving as the head goalie coach for Hockey Ministries International in Chicago for two years, combining her love of the sport with her faith. Wise beyond her years, Peters brings a grounded perspective to the Gophers’ locker room and is the first to say that, while she loves the sport, there is more to life than hockey. Her teammates describe her as compassionate, dedicated, and thoughtful. Peters plans to attend medical school for fall 2018 with hopes to go into the military and eventually work for the Air Force. Rivera came to Fredonia on a mission. The Pacific Palisades, Calif., has seen his mother, Dana, battle back from a stroke that had left her paralyzed from head to toe. He had seen her undergo surgeries and rehab and get better and make speaking appearances to motivate other stroke survivors. Inspired by his mom, Luke approached Head Coach Jeff Meredith and asked to start a Stroke Awareness Game the following season. Camouflage red jerseys were ordered, a date was picked, and donations were solicited. The first event raised nearly $10,000, the second another $10,000 for The Foundation of Kaleida Health. Even though Luke missed the entire 2017-18 season with an injury, he remained part of the team and its community engagement. Said Coach Meredith: “Luke’s work in the Stroke Awareness Game is testament to who he is as a young man and the level of care he has. Since his arrival in Fredonia he has wanted to make a difference in our community, and he truly has.” 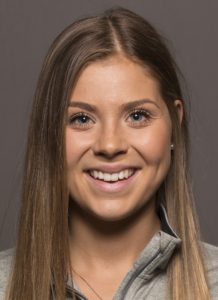 Spring has spent four years being a leader both on and off the ice for the Ohio State women’s ice hockey team. She’s played in every game the team has had since first putting on the Scarlet and Gray in 2014, and is on pace to reach the top-10 in games played by a Buckeye in program history. In addition to playing in every game, she was named a co-captain of the team prior to the 2017-18 season. Her leadership, however, extends beyond the ice. She made a “Soles for Souls” trip to Ecuador with other OSU student-athletes in May to distribute shoes to those in need. She’s also helped organize the team for Meals on Wheels events, and many other service opportunities. Lauren lives her life in a selfless manner, always working toward the best thing for the team and community around her.

Danny Divis and Justin McKenzie from Saint Michael’s College were named the 2017 recipients of the Hockey Humanitarian Award.

The 23rd recipient of the Hockey Humanitarian Award will be announced Friday, April 6th as part of the 2018 NCAA Men’s Frozen Four in St. Paul, Minnesota. Additionally, the Hockey Humanitarian Award Foundation will make a donation to the charity most important to each of the five finalists. These donations are made possible with the generous support of the award’s partners and donors.